Which company has the best Fresh-Frozen seafood?

From the day we found that ship-to-your-door seafood companies existed, we were eager to try as many of them as possible. So, we did our research and decided to start with five very-highly rated seafood providers.

Our goal is to provide an informative, raw, genuinely real review so that consumers like you can get the best seafood around for the most affordable price.

Wild Alaskan Company comes in strong at our number one spot because, well, they do a lot of things right. Starting with the fact that the company only sources sustainable, wild-caught seafood from the Pacific Northwest, then ending with a great overall experience, from the moment you order to the when it arrives and you cook it up. It’s all convenient and easy.

And that’s important because everyone in the country deserves to try fresh Alaskan seafood right? Right.

Aside from shipping anywhere in the USA and having sustainable sourcing practices, Wild Alaskan Company has its process down to a T. 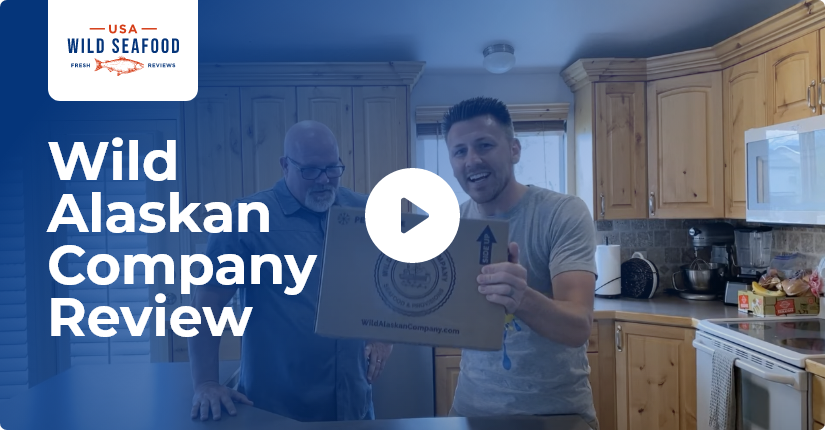 Why we liked Wild Alaskan Company
Do you want the good or the great first? Seriously though, Wild Alaskan Company gave us an incredible experience from start to finish, which is precisely why it landed in our number one spot on this list.
Other important details 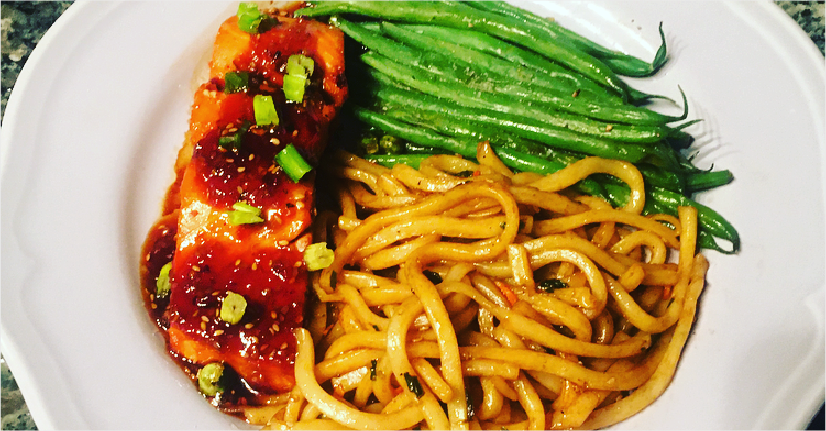 
Wild Alaskan Company bills through a monthly subscription or once every two months, but you can pause or cancel anytime. This is wonderful for smaller families that simply don’t consume as much food.


On this note, it’s important to know that they have live chat on their website and a very easy-to-work with customer support team. Although, we doubt you’ll even have to go that route unless you decide to pause/cancel your shipment.


You can choose from three options: an all salmon box, a combo box with salmon and white fish, or a wild white fish box. Each is available in a 12-piece or 24-piece order.


The amount of fish and quality of the fish justifies the $131 monthly price point. The only downside we found was the inability to order a la carte. But we didn’t deduct many points for that, because of the aforementioned monthly and every other month subscription options.


Because this is our number one choice, we took a deeper dive and wrote a more in-depth review that you can see here.

Show me the Seafood

Lummi Island Wild, much like Wild Alaskan Company, is heavily invested in providing wild-caught, sustainable seafood to anyone who wants it in the USA.

Lummi Island Wild allows for individual orders on their website or community orders through their buyer’s club. But their buyer’s club is only available in select states, and to get information on it you have to speak with a company representative.

All in all, getting fresh seafood in bulk may not be an option for everyone, but the individual portions are. That can be a blessing or a curse, depending on your situation and how much fish you want.
Why we liked Lummi Island Wild
Lummi Island has options galore that go beyond fish and extend to crab and other seafood. The option to purchase individual portions is a strength and a weakness, but we see it as more of a strength.
Other important details 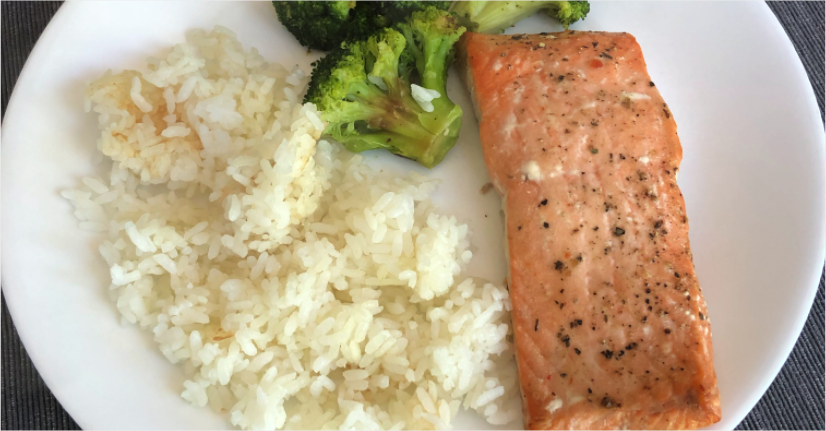 We really like the ability to order smaller portions, but it comes at a cost, literally. Shipping is only free if you spend more than $99, which is a total bummer. The reason we are repeating that for the umpteenth time is because we got burned on that.

We ordered six portions of salmon and paid $90 for the fish and an additional $80 for shipping. Gasp!

Rookie mistake, but we didn’t notice that at first on their website.

Overall, the product and packaging were great. Lummi Island Wild shipped the fish in a styrofoam container that could easily be re-used as a quick cooler for a picnic. That was a nice feature.
Show me the Seafood

Sena Sea stands by it’s claim that every fish is hand caught and selected for shipment by the company owner, Rich. That’s quite the service!

Sena Sea offers a monthly subscription similar to Wild Alaskan Company, which can save you money, but also allows for smaller orders, which usually bundle two or four 6oz portions. The price varies depending on the type of fish you order and quantity.
Why we liked Sena Sea
The taste of the fish was exceptional and very comparable to Wild Alaskan Company or Lummi Island Wild, but what stood out with Sena Sea was the packaging.

The custom branded packaging made us feel like the fish would taste amazing. Then when we cooked it and it met our preconceived expectations, we were delighted, to say the least.
Other important details 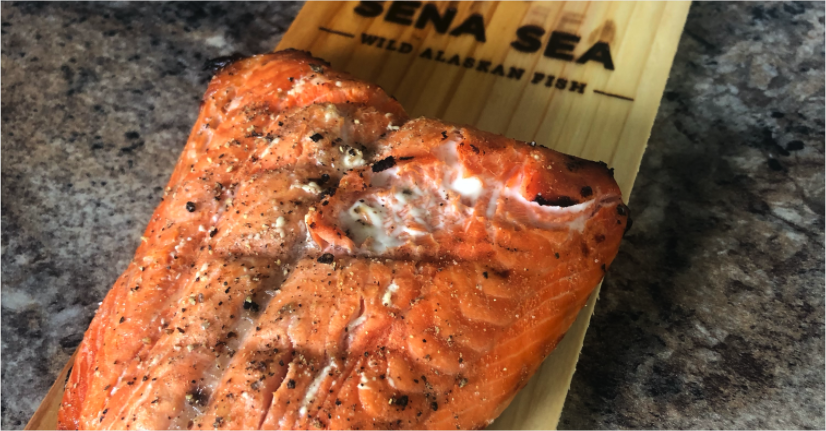 We ordered four portions of fish that equated to approximately $82 and paid an extra $25 in shipping. That put us at roughly $20 per portion, which is pretty spendy per portion.

While it was clear that this wasn’t from your neighborhood grocer’s meat department, and that it was fresh-frozen fish from Alaskan waters, it’s hard to wrap our heads around paying that much more per portion for prettier packaging, hence the reason Sena Sea dropped to our third spot on this list.
Show me the Seafood

Sizzlefish offers a variety of wild-caught seafood, including Alaskan salmon. The company promotes a monthly subscription but also allows for non-subscription orders as long as you still buy a full box. So, either way, you’re still paying for 10+ portions all at once.
Why we liked Sizzlefish
We liked that the shipping was free and that the regular salmon had good taste. The filets come in 4oz portions instead of 6oz, and usually in a box with 14 portions instead of 12 or fewer. The smaller portions still gave us plenty to eat when plated with a salad, rice, or as part of a larger meal.
Other important details 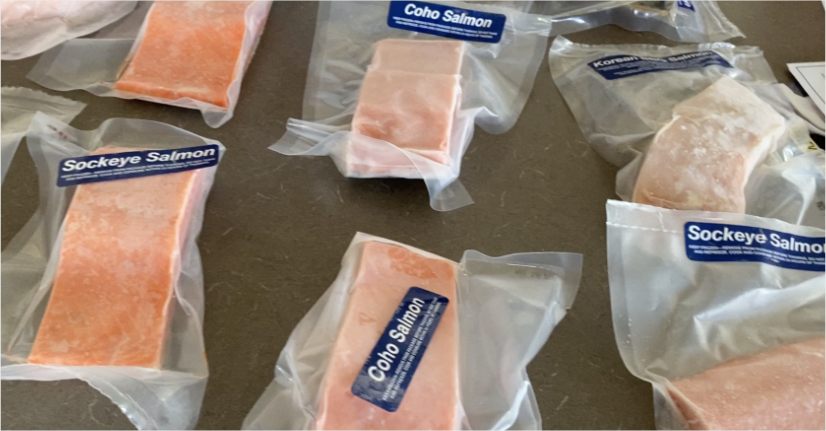 We ordered 14 portions of a salmon assortment box for $95 and got free shipping. The price per portion was just under $7. It was extremely economical for fresh fish, but the taste wasn’t as good as some of the other providers.

The non-marinated salmon was delicious, as we’d come to expect from such services, but some of the flavors (like Thai curry and Korean BBQ) just didn’t do it for us. In fact, the Thai Curry would have been tossed out if it wasn’t for a hungry “I’ll eat anything” teenager in the house at the time. We much preferred the regular salmon to the pre-marinated portions.

We could have ordered just king salmon instead of an assortment box, but then the price would have gone up drastically, costing $138 for 14 portions, putting the price at approximately $10 per portion.

Our other big issue with Sizzlefish was that the labels were poorly placed, and many had fallen off of the fish during shipment, so we had to play a guessing game to match the right label with each fish. The labels just didn’t stick well, and that was a bummer because we wanted to know exactly which fish we were cooking.

Update:  Since this review, we have learned from Sizzlefish that it has upgraded many fulfillment and sourcing practices as well as updated packaging to NEW eco-friendly coolers.

Show me the Seafood

Sea to Table offers a monthly subscription plan or non-subscription purchases, similar to Sizzlefish. Sea to Table boasts 1-3 days for shipping depending on where you live (more on that down below).

As we’ve seen with other providers, Sea to Table offers more than just fish but extends its menu
Why we liked Sea to Table
The packages were very well labeled and wrapped. They weren’t as beautifully packaged as Sena Sea, but the company still used very efficient labeling processes. The taste of the fish was very comparable to other providers, which was nice.
Other important details 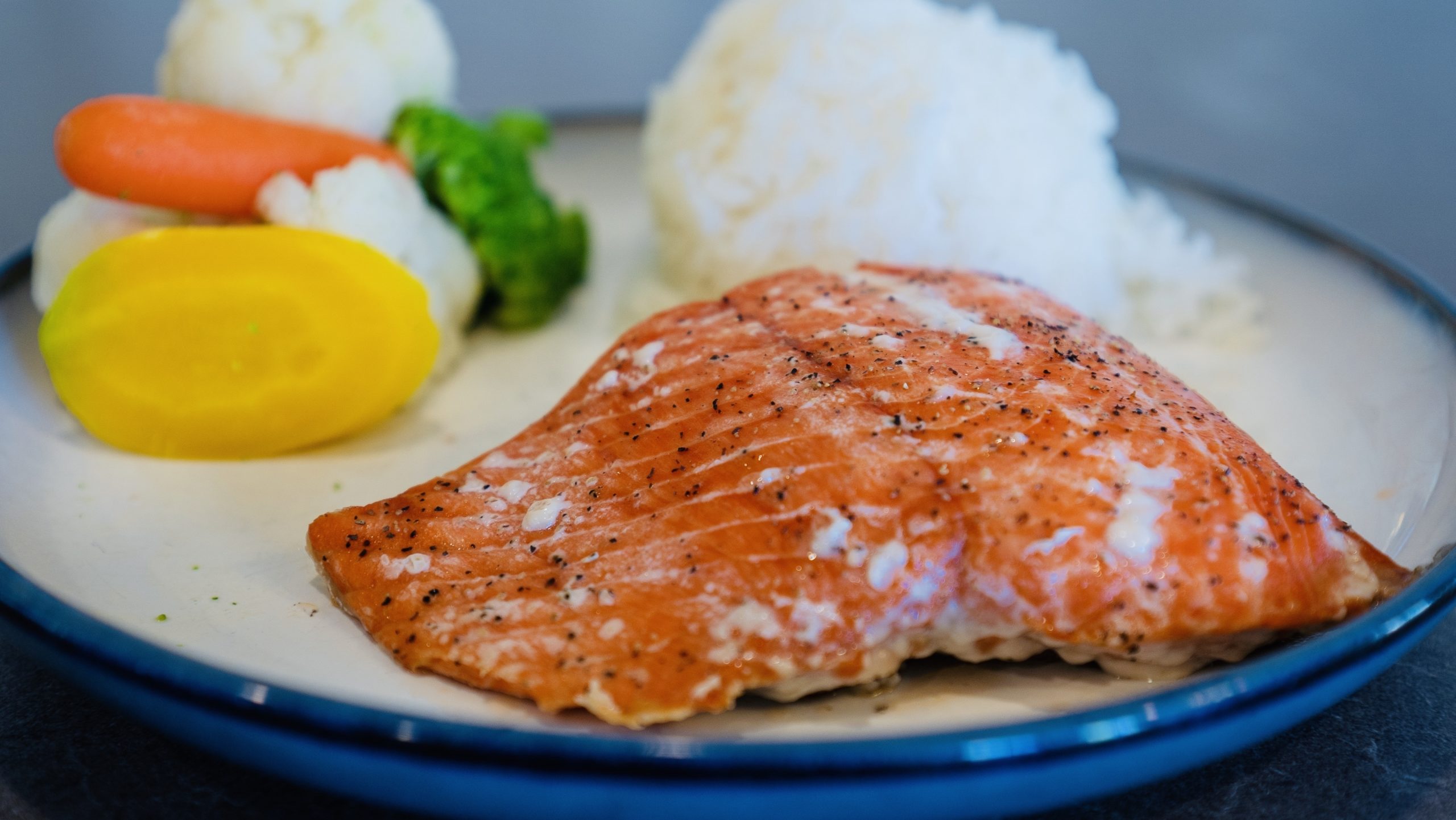 OK… OK… So here’s where things got fishy (pun intended)!

We made several orders and had them shipped to different locations about 30 miles away from each other in the same state. One order came cold, but not frozen, which was concerning, but we felt ok eating it.

The other package was completely spoiled and thawed. We had to seek a refund on that purchase, which wasn’t all that bad, but it was extra work and left a bad taste in our mouths, unlike the fish itself.

Each box that we ordered was $115 for 12 portions of fish, which equates to almost $10 per portion. After further research, it seems that people located in the western regions of the United States experience the most trouble with shipping. So, perhaps our experience would have been better if we lived in the east. Regardless, this experience dropped Sea to Table down in the overall rankings.
Show me the Seafood

Each of these providers has something to offer, but the clear winner here for us was Wild Alaskan Company. Not only was their fish delicious, but they offered the best overall experience when you include shopping on their website, packaging and shipping, cost per portion, quality and taste, and any other factors included in the process.   The different providers all have their strengths, and depending on your needs, one may suit your needs better than another, but for the majority of people, we think Wild Alaskan Company currently has the best offering for amazing salmon and wild-caught fish. 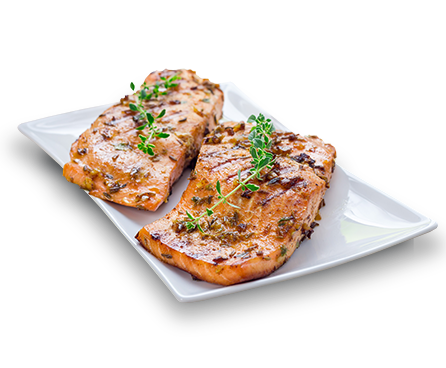